Dolores with a puppy named Michael. 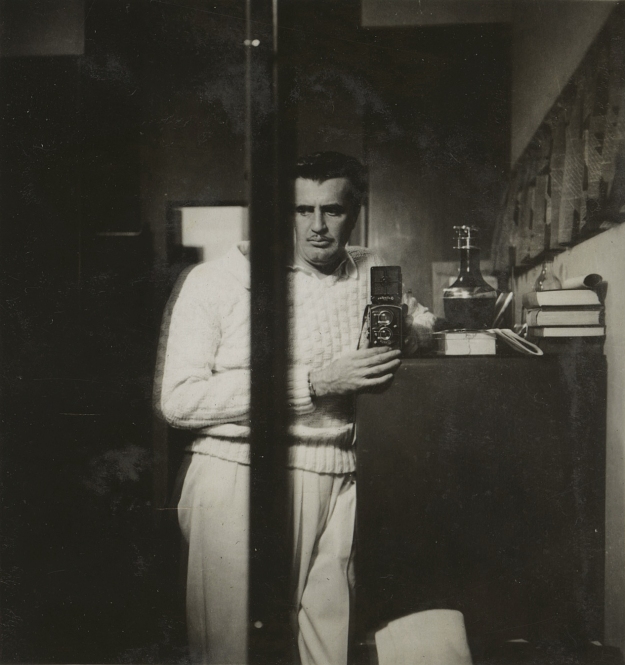 Selfportrait of Cedric Gibbons at his home in Santa Monica, California. Circa 1933.

We acquired a couple of days ago, in Paris, a fascinating piece of Mexican and Hollywood memorabilia : Dolores del Río and Cedric Gibbons family album from the 1930’s. We are still working on identifying most of the characters in the more than 500 prints, but would like to share with you some of the most beautiful photographs.

Cedric Gibbons, husband of Dolores in the 30s, was one of the most successful art directors in Hollywood. That might explain the stunning quality of some of these family portraits. 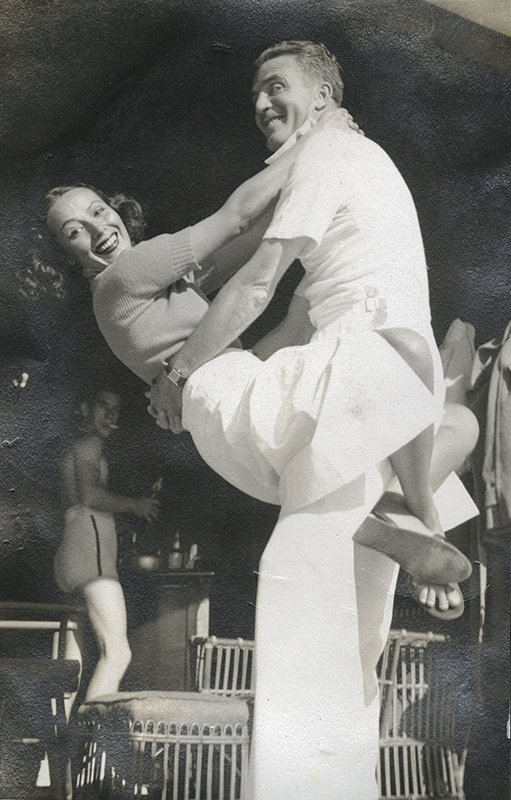 Dolores del Río and Cedric Gibbons (?) at her home in Santa Monica, California.

Dolores del Río with Gary Cooper and Sandra Shaw by the pool at her house in Santa Monica, California. Circa 1930s. 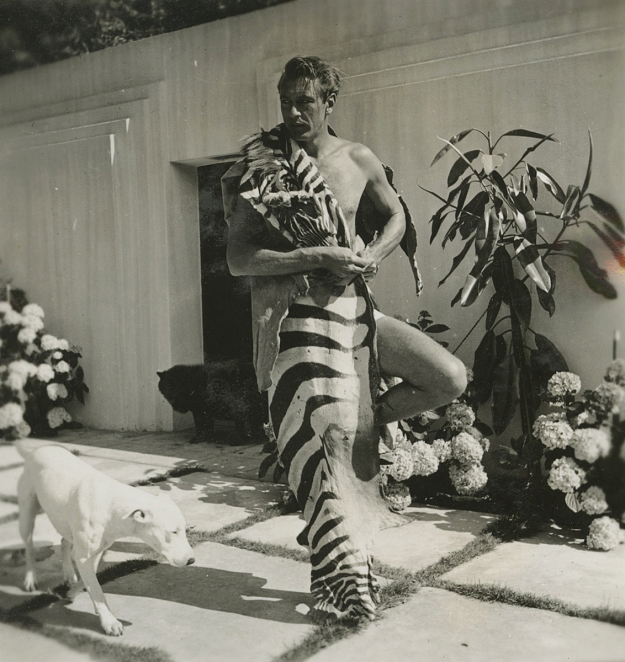 Gary Cooper by the pool with zebra skin at Cedric Gibbons and Dolores del Rio’s home.

Jean Harlow (?) by the pool at Dolores del Río’s home in Santa Monica, California. Circa 1930s. 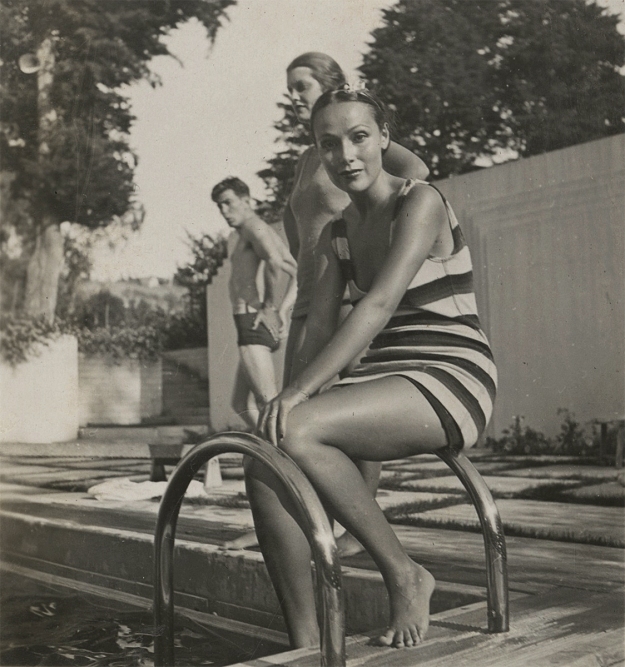 Dolores del Río with friends by the pool at her home in Santa Monica, California in 1931.

Dolores del Río playing tennis at her home in 1931.

Dolores del Río and Johnny Weissmuller by the tennis court at her house. 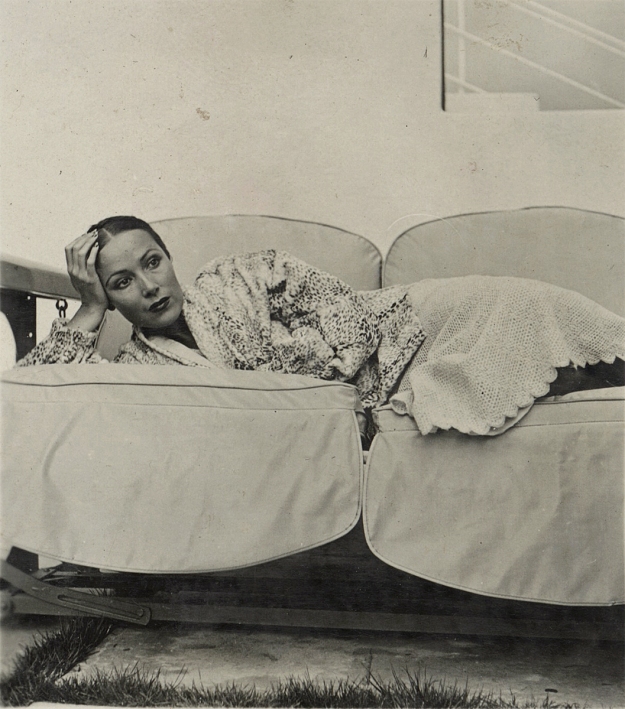 Dolores del Río at her home in Santa Monica, California.

Dolores del Río at her home in Santa Monica, California. 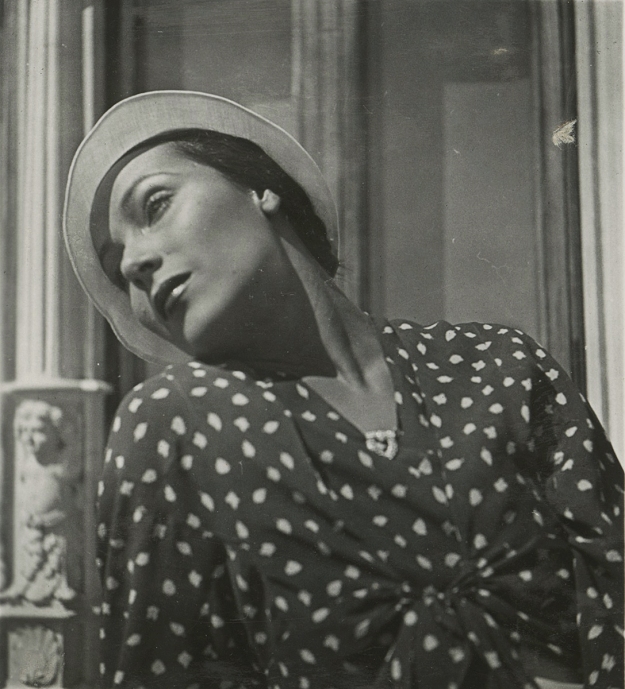 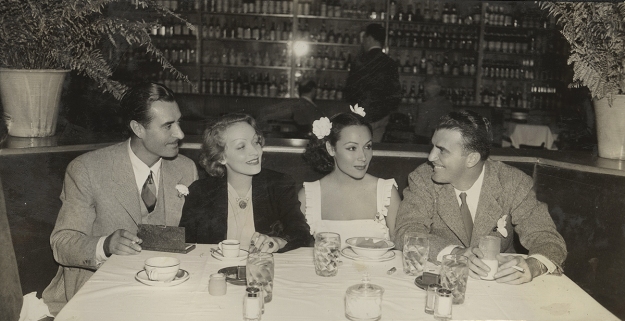 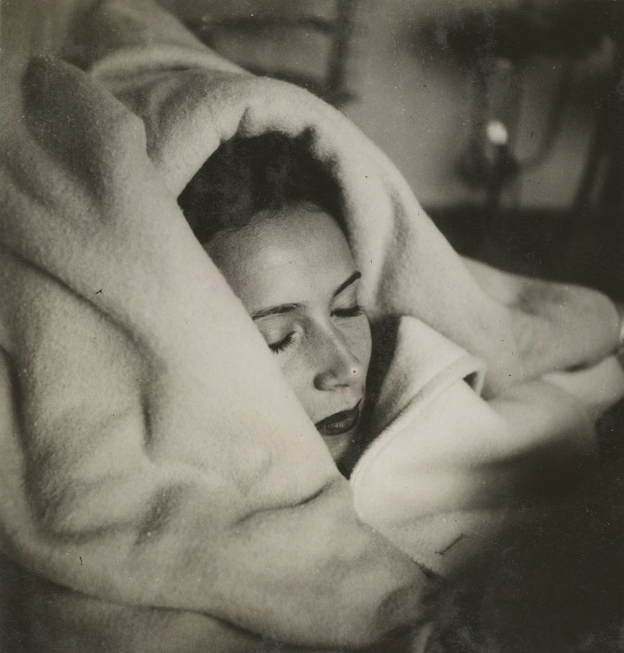 Dolores del Río sleeping aboard the cruise ship SS Lurline in Hawaii in 1933.

Dolores del Río tanning aboard the cruise ship SS Lurline in Hawaii in 1933.

Page from Dolores del Río’s photo album with images from 1931-1939. Including photographs of her friend Gary Cooper.

We picked up these gorgeous cartes de visite of Brazilian tipos yesterday.

They were created by two photo studios: “Companie Fotografica Coquimbo” and “Arcenio Borges Photographo” in Rio de Janeiro around the 1870s.

The only other photograph from “Companie Fotografica Coquimbo” we’ve found is at the New York Public Library.

Tell us what you think about these vintage photos in the comments section below and share them with all your Brazilian friends. 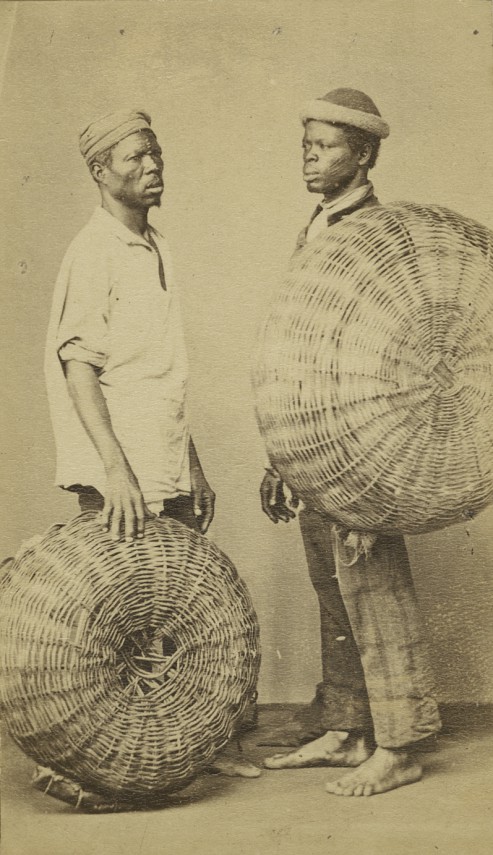 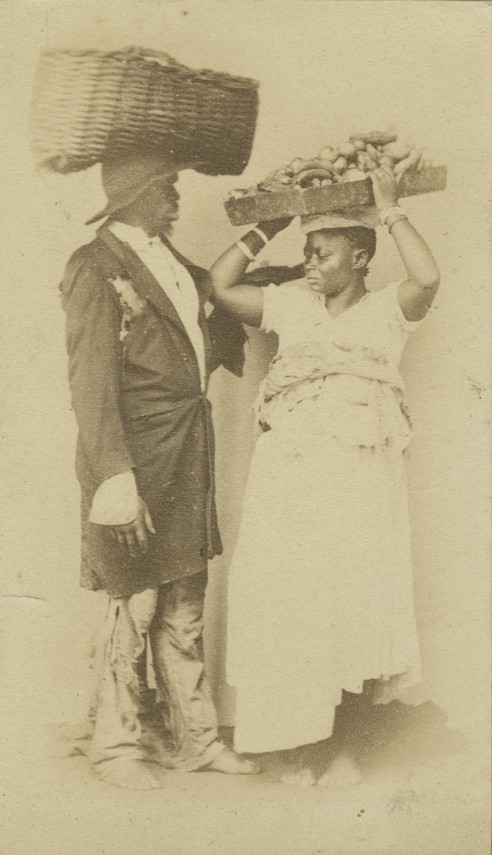 This last photograph came with the rest of the group but we believe, based on the clothing and features, that it was taken in Bolivia.

These are the versos of the cartes de visite. 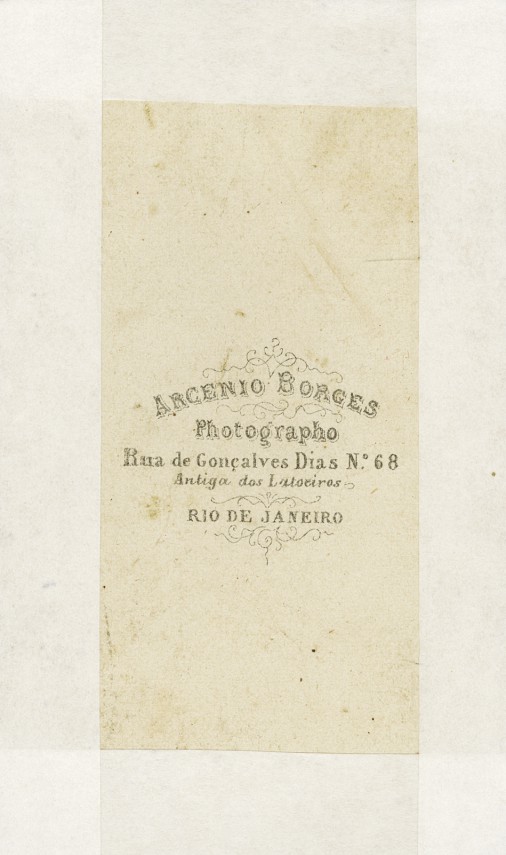 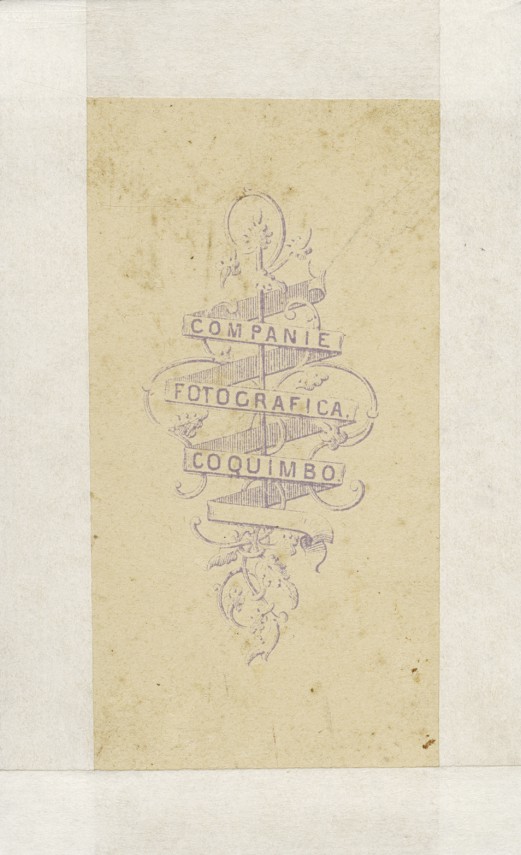 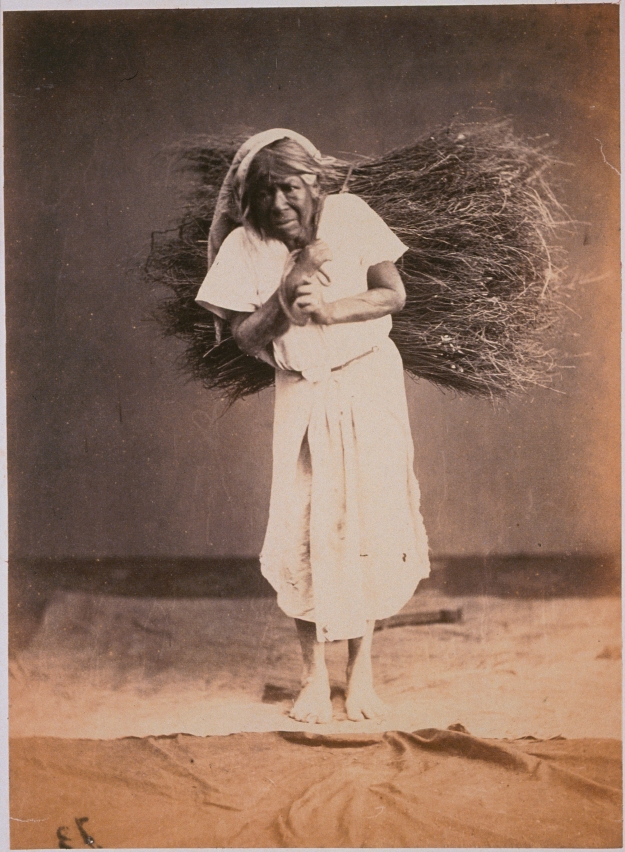 For years photography researchers have struggled with the oh, so familiar question: who is the author of this photograph? Who is the person responsible for the intellectual content of an image? Who are the rightful owners of the images: the photographer or those who publish them? We’re not going to delve too deep into that subject and try to find the right answers to those questions, but we’ve found ourselves right smack in the middle of this ongoing debate.

This is a difficult post to write because unfortunately we have more open-ended questions than answers for our recent discoveries.

Firstly, we will state the facts and later we will list all the questions.

Fact #1: Photographers have never been very good at registering their own work since the beginning of the craft in 1839. At this time it was editors and publishers whom were more likely to do so; hence the confusion about a lot of signatures and authorship.

Fact #2: There is an album called “Souvenir du Mexique, circa 1860” found in a private collection in Mexico with 29 albumen prints. In most of these prints we can find descriptions, annotations or signatures by photographers François Aubert and J.J. Buis. 17 of these photographs are attributed to J.J. Buis.

Fact #3: There is an album with 17 albumen prints at the Société française de photographie (SFP) in Paris credited to J.J. Buis. The album is called “Vues du Mexique.” 16 of these prints’ titles match the ones in the album “Souvenir du Mexique, circa 1860”. However, of the 17, only one is signed by J.J. Buis: Village de Miacatlan, 32 lieux de Mexico (Fig. 2); none are credited to Aubert.

Fact #4: A decade worth of SFP bulletins were searched to establish the provenance of the album “Vues du Mexique”. Buis was never a member of the SFP and we do not know who donated it.

Fact #5: Several photographs from these two albums have been found in others credited to Désiré Charnay or Julio Michaud. However, we found a signature by Alphonse Pestel. You can see an example of this with fig. 4 and fig. 5. 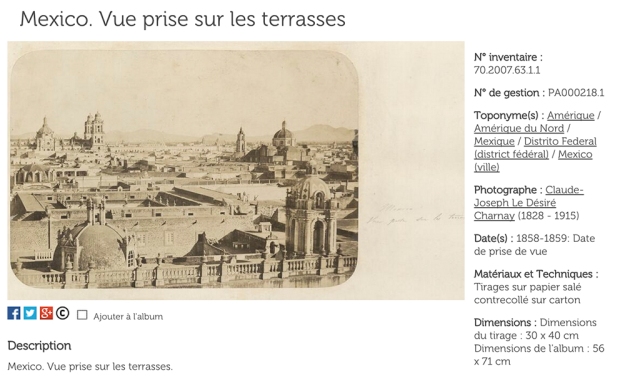 Fact #6: Alphonse Pestel was a French photographer active in the 1860s and 1870s. He had a studio in Paris in 3, Boulevard Bonne-Nouvelle. Of J.J. Buis, we have no further information.

Fig. 6 – Close up of Pestel’s signature on a different photograph.

Fact #7: In the Archivo Fotográfico Manuel Toussaint we can find the photograph “Mexico= Capilla protestante en Sn Francisco” (fig. 7) attributed to Charnay but signed by Pestel. At the Museum Quai Branly the same image is called “Mexico. Portail de San Francisco” (fig. 8) and it is credited to Charnay. However, this one does not have the Pestel signature. We can find it for a third time at the Getty’s archive but this time captioned “Puerta de San Francisco, [between 1865 and 1867]” (fig. 9) with the author as Pestel.

To our knowledge, the Archivo Fotográfico Manuel Toussaint has never mentioned Pestel in their findings and studies. And neither has the Quai Branly in their research about Charnay. 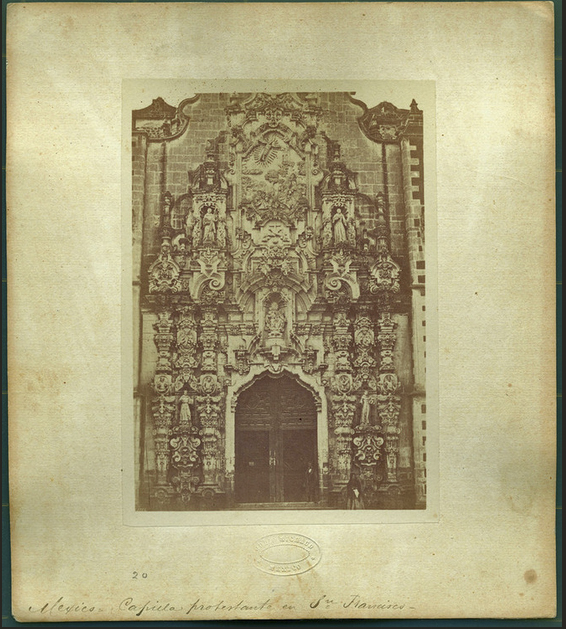 Fact #8: The photographs signed by Pestel always seem to be copy prints of larger prints. He is known to have published several cartes de visite of Mexico. The Getty also has an album titled “Mexique, 1865., [1864-ca. 1867]” where the contributors are, E. Leroy, Pestel, and François Aubert. No digital reproductions of this album are available.

Fact #9: Some of the photographs in all these albums and collections have been credited to five different photographers: Désiré Charnay, Julio Michaud, François Aubert, Alphonse Pestel and J.J. Buis. For example: some Charnay signed by Pestel, thought to be Auber signed by Buis.

Here is a more visual representation of the connections between them:

-Who is J.J. Buis? What is his connection to François Aubert? What is the provenance of the album at the SFP? How is a photograph from Buis/Aubert found in an album by Michaud? Was Buis ever in Mexico?

-When did Pestel arrive to Mexico? When did he leave? What was he doing there? Why and how is Pestel linked to Michaud? Did he actually work in Mexico or just copy larger prints by Charnay and Aubert?

If you’re interested in a deeper study of this subject we recommend a very interesting read in Spanish on the construction of social history with the help of photography written by Fernando Aguayo Hernández, professor and researcher at the Instituto Mora Area of Oral History in Mexico. Starting on page 15 of the pdf he undertakes the subject of authorship vs publishing; and in page 18 he writes about Michaud as an editor and the reproduction of images by different people, including Pestel.